Do you really offer a 100% satisfaction guarantee?

Yes, read about it HERE.

Will it work on  super fine gold?

Just like ANY gold pan, if super fine gold is your primary target you work the pan / material differently than someone out “generally prospecting”.  Example… the amount of force needed to move LARGE rocks out of the pan is probably enough force to cause some losses on super fine gold. It’s just common sense and pretty basic mining physics.  We STRONGLY suggest you watch the Proportional Force video on out YouTube channel. Once you watch that video you will better understand.
If super fine gold is your target then work smaller amounts of pay and reduce the force used during the cleaning stage.

How much material will it hold?

Watch the video on this site and you’ll understand. It’s best worked with about a 1/2 gallon of pay in it. Also read the owner’s manual.

Do I have to classify?

No, dump raw pay into the pan and work as shown.  Rocks larger than 2.5″ may have to be pulled out by hand.

Do you have to have strong stream flow?

No, again watch the video and you’ll see Doc working it in fairly calm / still water.

Will it work on Beach Sands?

We would rather just say NO.  Panning beach sands is a FINE ART that is not easy.  This is mainly due to hydraulic equivalence issues. (Another good video to watch.)  So if beach sands are your target, we would have to say no. 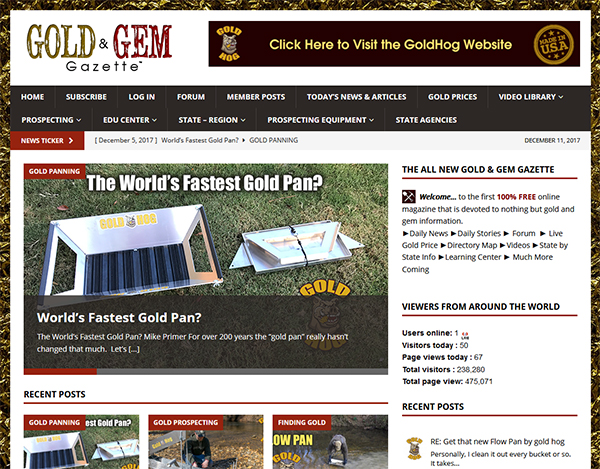